More
Contact UsUse CasesWhat is pCell
What are your private or public LTE/5G network requirements? Let us help. >

ALL USERS CAN USE FULL SPECTRUM AT ONCE. 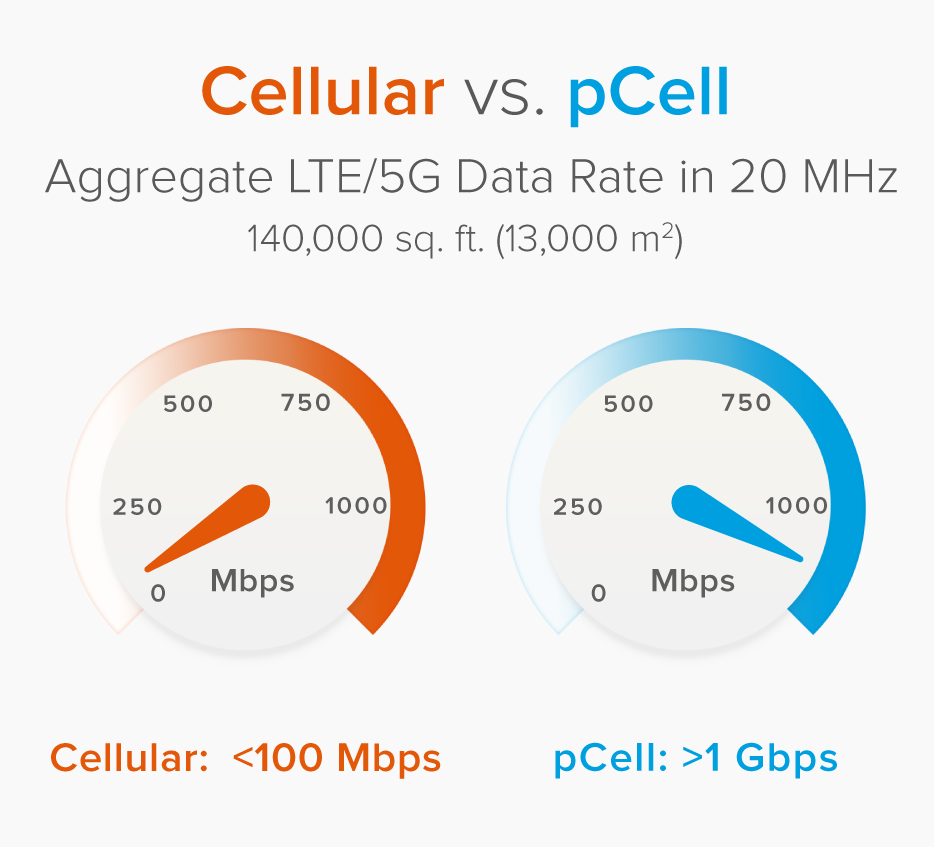 Private LTE/5G under YOUR control.

Over 100 Academic Papers about pCell

Over 300 Patents Issued for pCell
10 Ways to Understand pCell

Rather than avoid interference, pCell exploits constructive interference to synthesize a personal cell (“pCell”) for each.

Cell service slows to a crawl when there are many users.

pCell service is full speed even with many users. 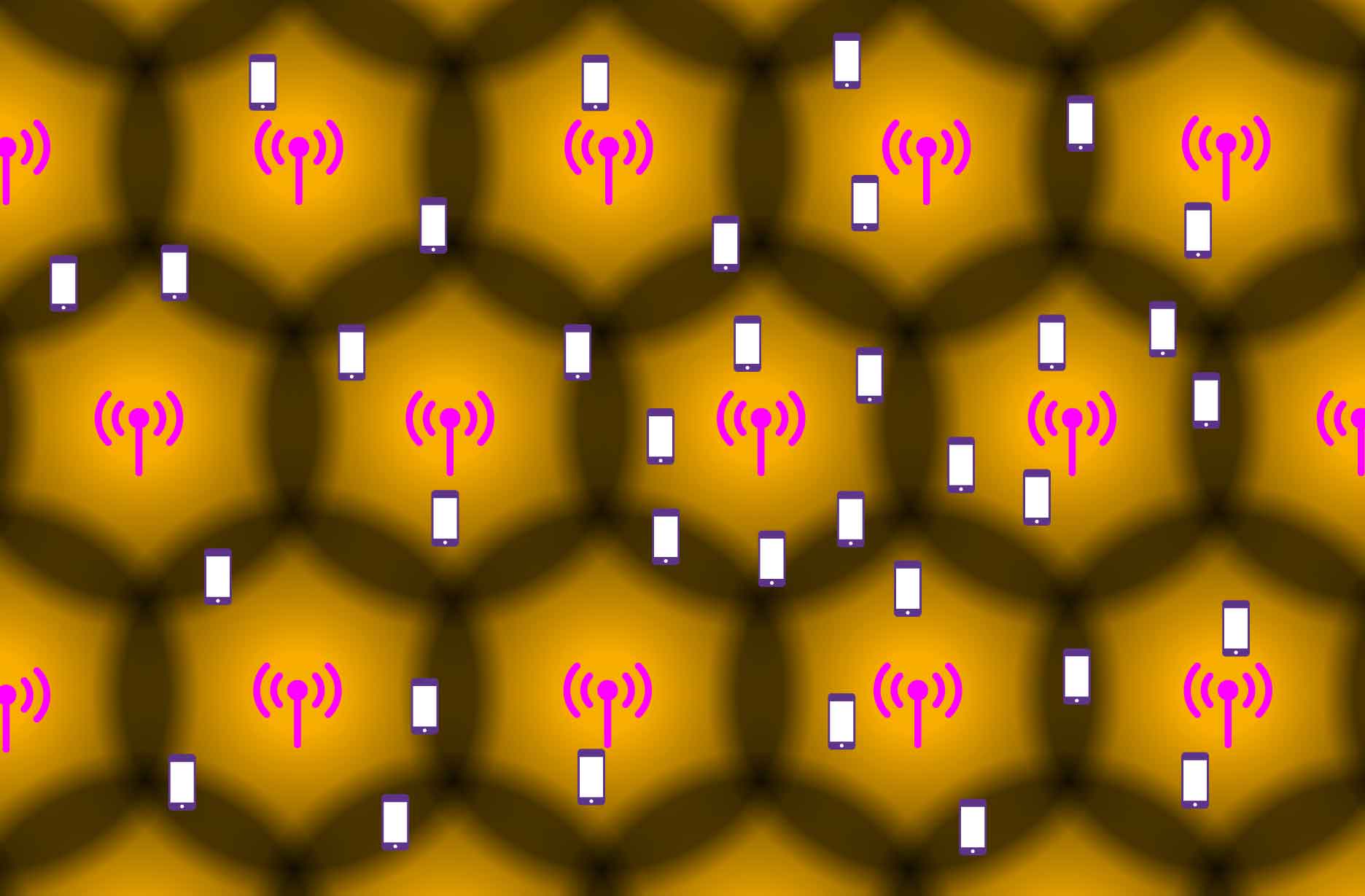 All mobile devices within a Cell share its spectrum, taking turns to avoid interfering with each other. As more devices share the Cell, they reduce the data rate for all devices. Shared Cell data rates are highly variable and can be very low. 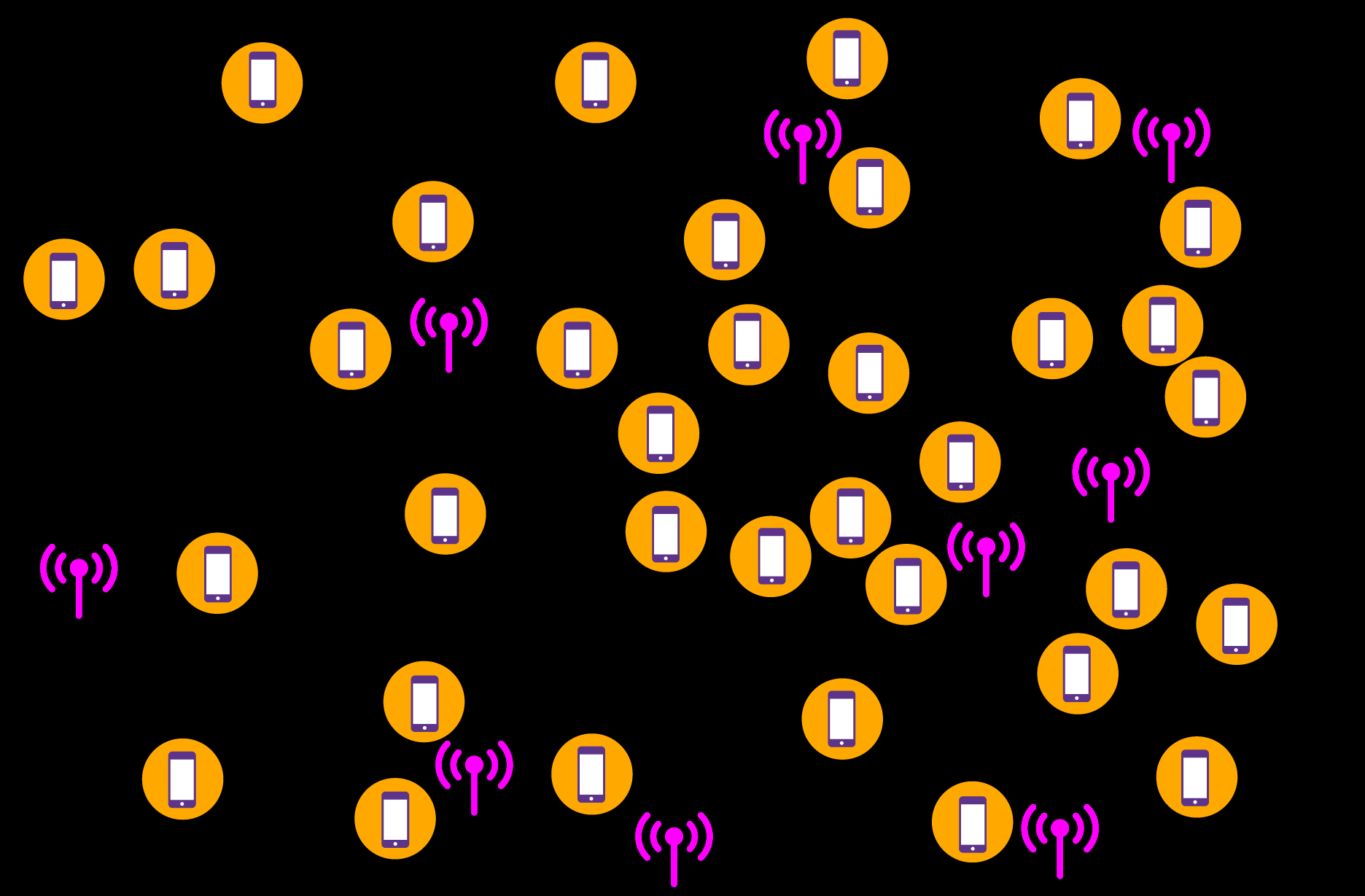 pCell technology provides each mobile device its own, unshared personal cell (a “pCell”) that follows the device as it moves.

All mobile devices can use 100% of the spectrum capacity at once, regardless of location.

pWave® radios can be placed anywhere in the coverage area. Constructive interference is exploited to synthesize a pCell around each mobile device.

As users move throughout the coverage area, there are no hand-overs.

pCells dramatically multiply the capacity of the spectrum, with uniform, near-peak data rates throughout the coverage area.

7 user phones have dotted lines that show their location around the middle Cell. The blue bar graph to the right shows the per-user data rate. Phones 1 and 7 are closer to Cell center and have higher SINR and data rates. Phones 3 and 4, further from Cell center, have lower SINR and data rates. Also, all 7 phones share one Cell's spectrum, taking turns using it, further reducing the per-user data rate. As a result, Cell users experience a small fraction of peak data rate with high variability depending on location.

The left chart illustrates the same 11 antennas and 7 user phones at the same locations, using the same spectrum and transmit power as the previous Cellular example. But rather than transmitting incoherent Cell waveforms, the 11 antennas transmit pCell waveforms that coherently interfere at each phone's location, resulting in each of the 7 phones concurrently receiving its own high-SINR waveform at once. This is shown by the SINR spikes at each phone location. Each SINR spike is a pCell.

The red bar graph to the right shows that, since all phones are receiving near-peak SINR waveforms at once, all users receive near-peak data rate at once. While only pCell downlink is illustrated above, the same is true for pCell uplink: All pCell users concurrently receive and transmit near-peak data rate regardless of where their phones are located in the coverage area. 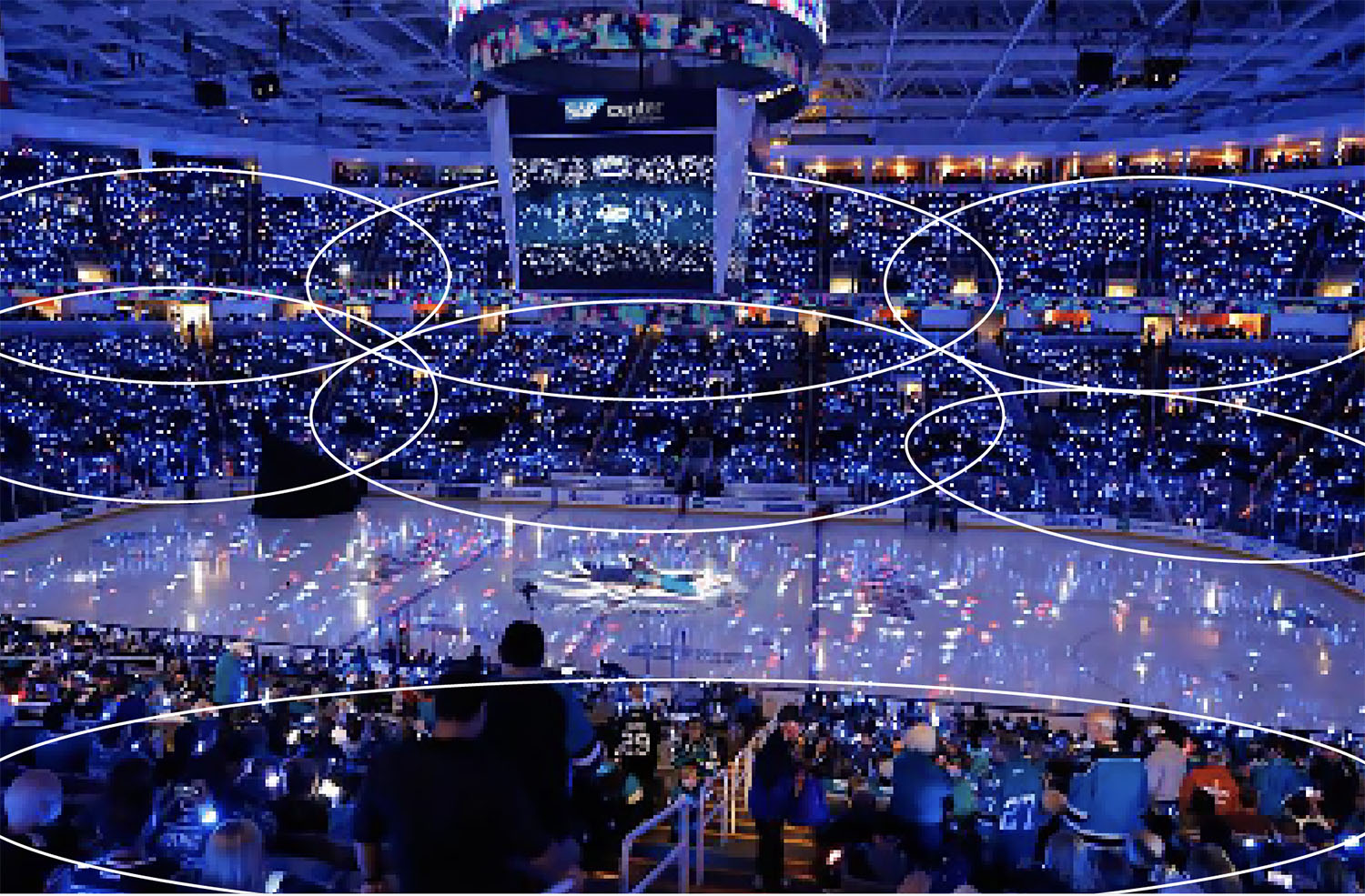 SAP Center’s arena bowl has a Cellular Distributed Antenna system (DAS) RAN for mobile operators that uses 32 remote radio units (RRUs) to create 7 Cells that try to avoid interfering with each other. To create these 7 cells, the 32 RRUs’ antennas were carefully aimed and power balanced. 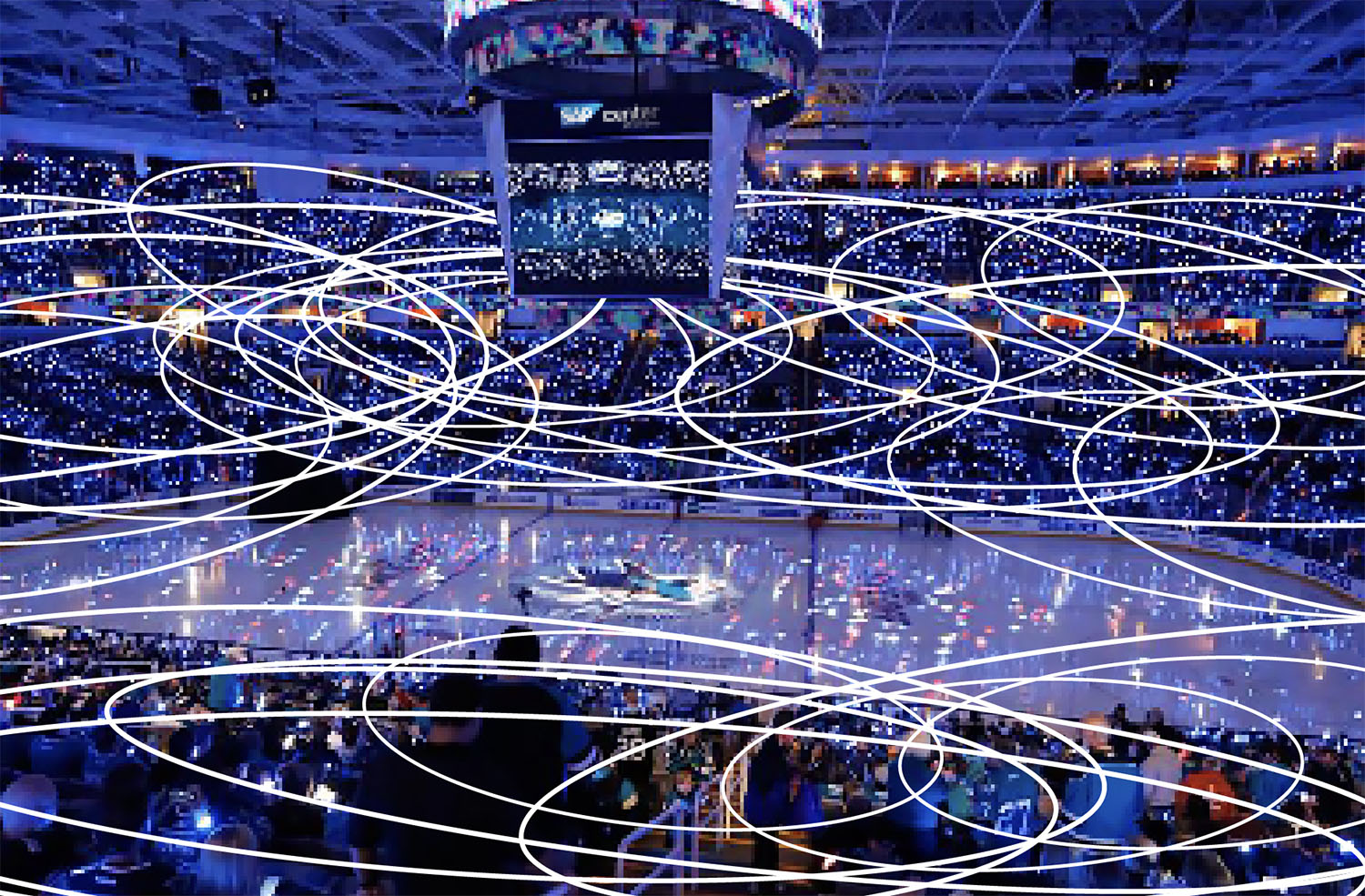 SAP Center’s arena bowl also has a pCell Private LTE/5G vRAN that uses 28 pWave® RRUs to create interference throughout. The 28 pWave RRUs’ antenna were roughly aimed around the arena bowl, all transmitting at the same power. 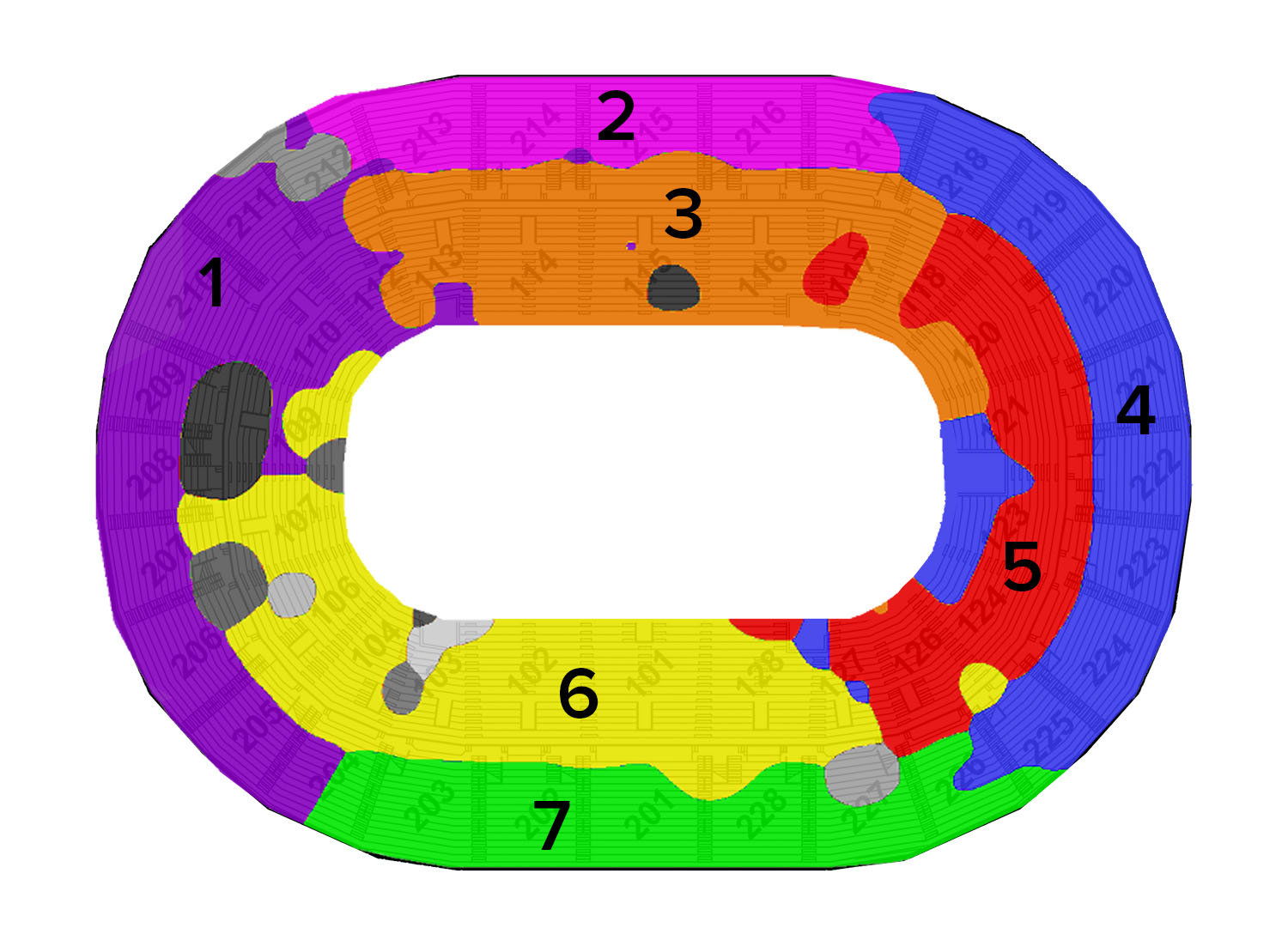 Despite careful aiming and power balancing of DAS RRUs, the result is an uneven, constantly-changing “patchwork quilt” of Cells due to extensive intercell interference contaminating all Cells.

The image shows the locations of each of 400 phones, running iPerf speed tests concurrently, that were connected to one of the 7 DAS Cells (in color and numbered) in the arena. However, even in an empty arena with no motion, the Cells are very unstable, with 1 in 9 phones performing a handover to a different Cell in successive iPerf tests, incurring a large amount of unnecessary overhead.

Further, 5% of phones attach to 9 or more Cells (in shades of gray) from outside of the arena, bleeding through open apertures and entryways, exacerbating handover overhead and intercell interference and impairing per-phone data rates. 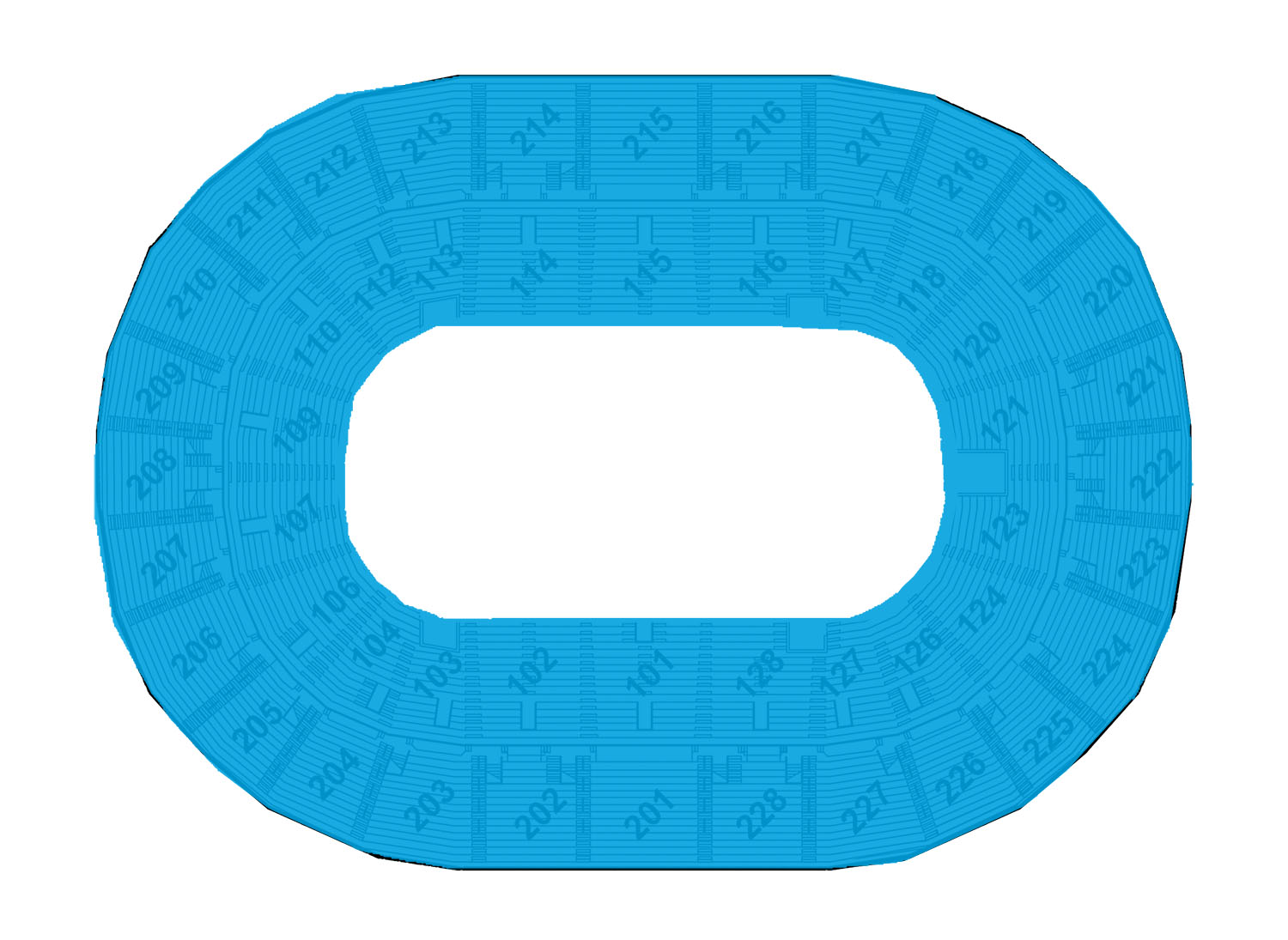 Despite the rough aiming and no power balancing of pWaves, the desired interference covers the entire arena bowl. The interference is exploited to synthesize pCells around individual phones.

pCell is cell-free. There is no capacity loss from intercell interference and no overhead loss from Cell handovers.

As users move their phones or walk around the arena, or as there is motion in the arena, each user's pCell stays locked to their phone within millimeters of precision in x, y, z position and yaw, pitch, roll rotation. pCell software constantly adapts, calculating new waveforms for each of the 56 antennas of the 28 pWave RRUs in less than 1 millisecond. 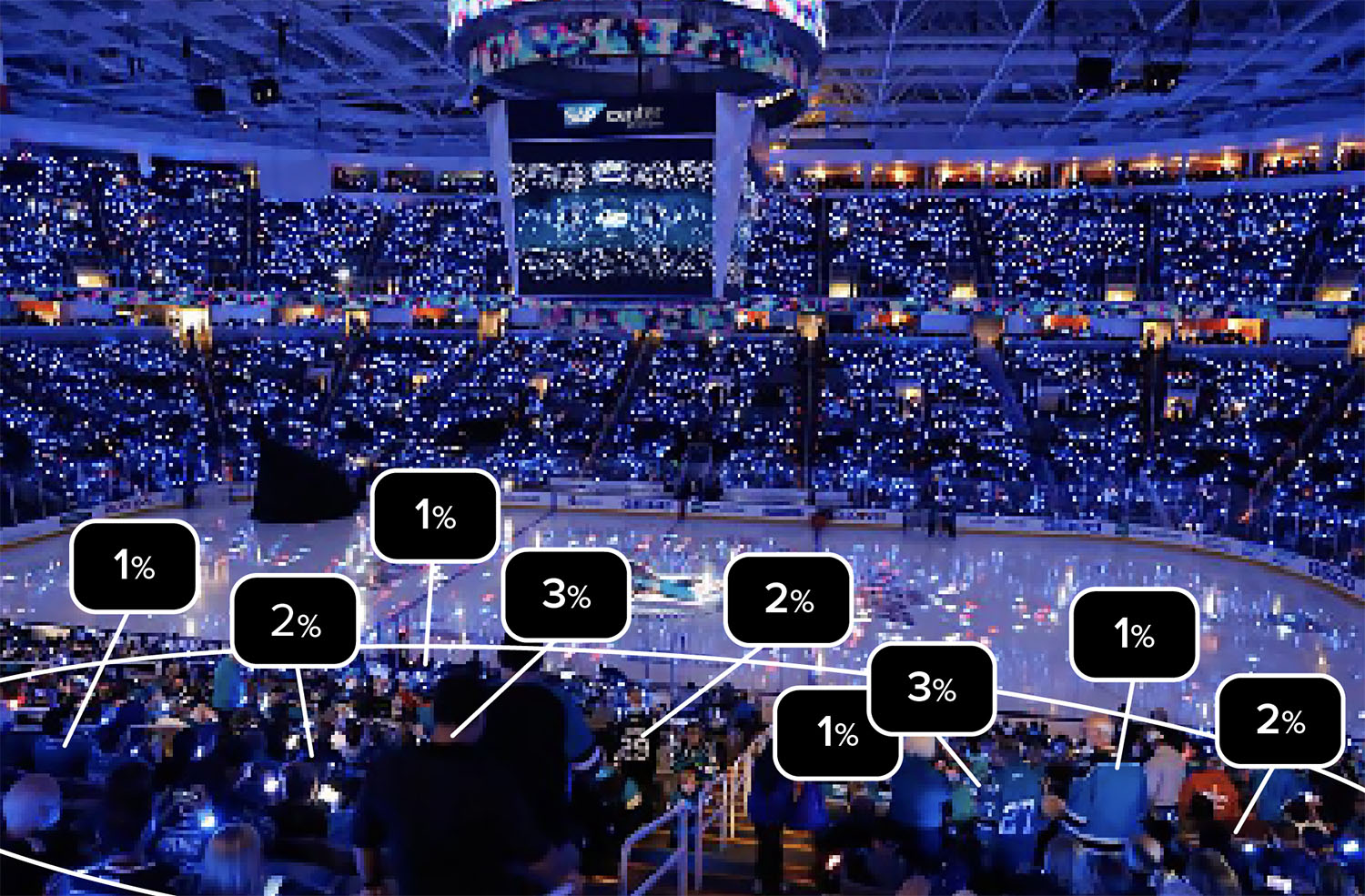 Given the extensive intercell interference, the “patchwork quilt” Cell layout, the back-and-forth handover overhead, and the fact all phones within a Cell share the same spectrum, per-user Cellular data rate varies widely by seat location and by how heavily other users are using the same Cell, and is usually a low data rate.

While new equipment can be added to utilize new spectrum to increase Cell capacity, the same variability issues will continue. Further densification will cause further intercell interference, resulting in diminishing returns. 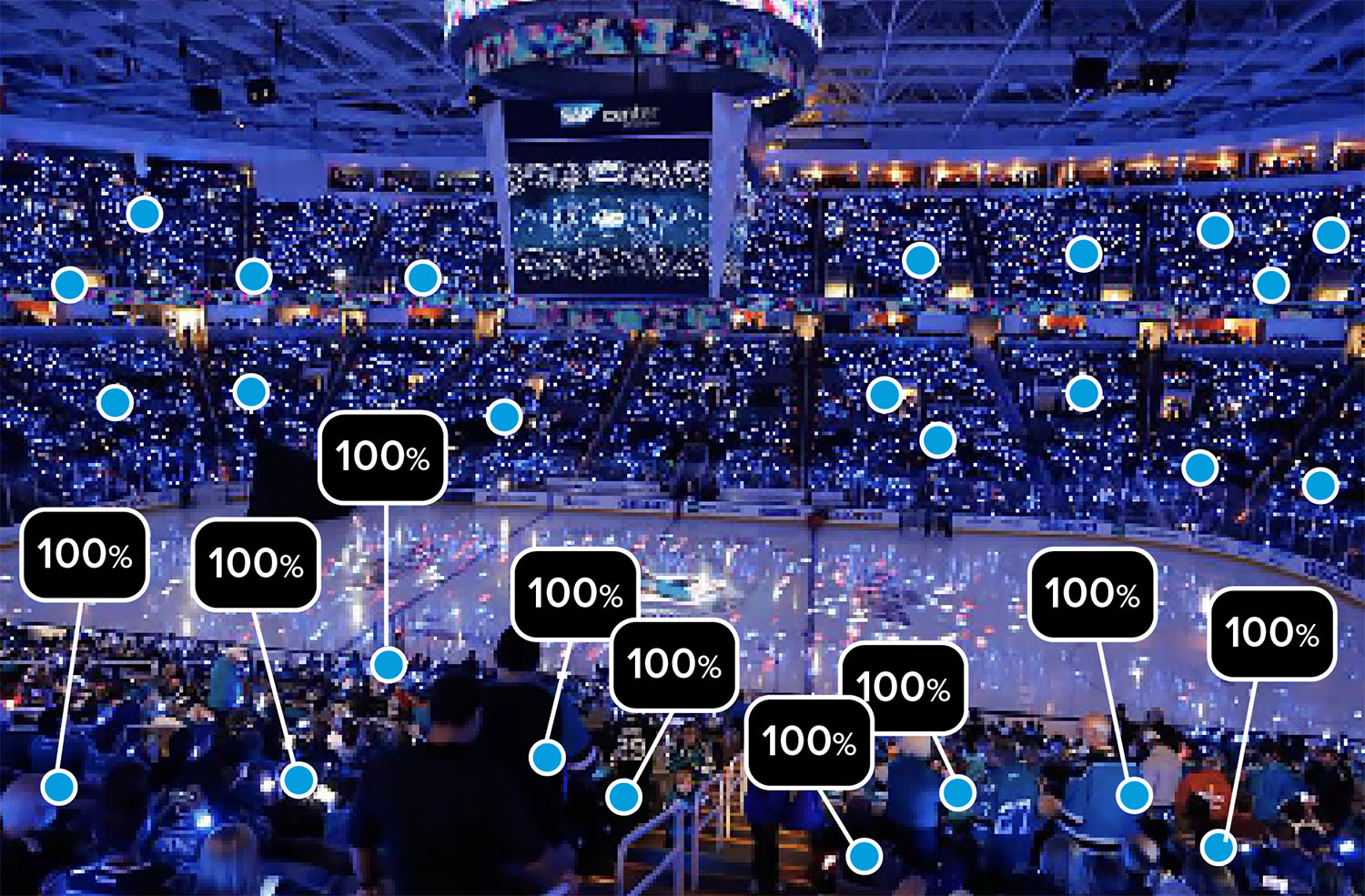 With pCell, performance is uniform throughout the arena bowl: any user can get 100% of the spectrum capacity at any seat.

The pCell system currently deployed delivers up to an aggregate capacity of over 1 Gbps in 20 MHz of spectrum. It is expandable by adding more servers to support more spectrum and/or more pWave radios at higher density. At any pCell capacity—even 10 Gbps or more—data rates will be uniform throughout the arena bowl. 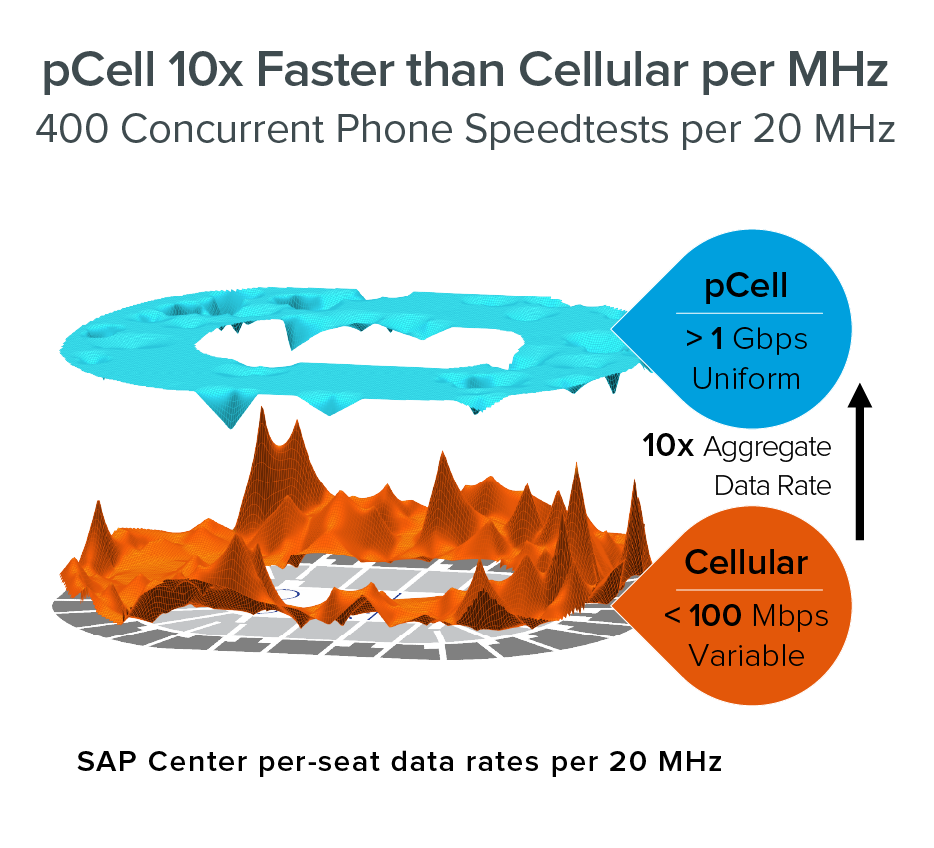 Underneath the chart is a seat map for the arena bowl. The height of the graph shows the speed test data rate at each seat location, with Cellular RAN results in orange and the pCell vRAN results in blue, normalized to the same downlink bandwidth. 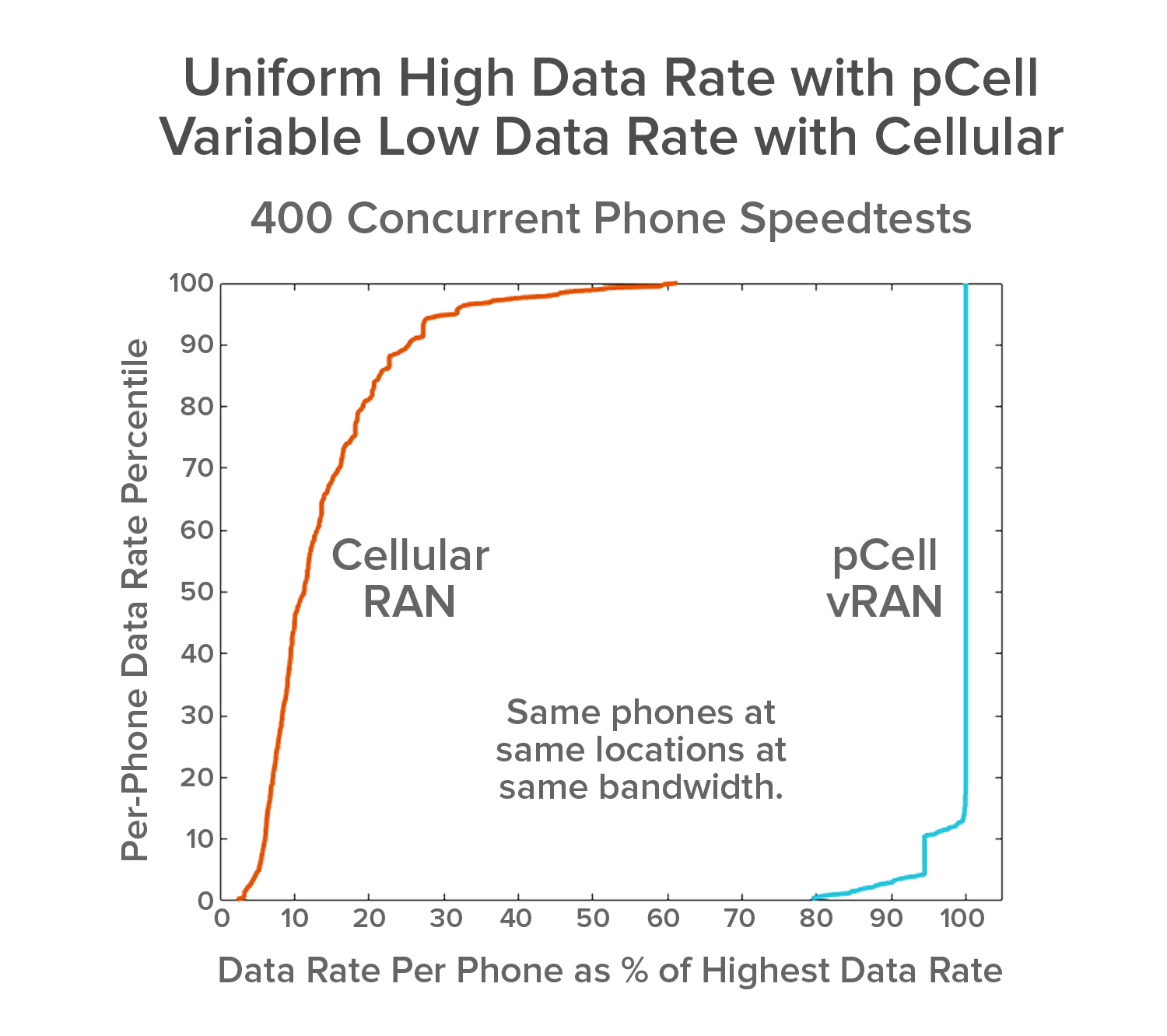 The previous Cellular vs. pCell SAP Center per-seat data rate chart can be visualized as a Cumulative Distribution Function (CDF), which shows the percentile of 400 phones (vertical axis) receiving a given data rate relative to the percentage of the highest data rate phone in the same bandwidth.

With the pCell vRAN, almost 90% of phones receive the highest data rate resulting in a mostly vertical blue line. 97% receive >95% of highest, and the remaining 3% receive >80% of highest. 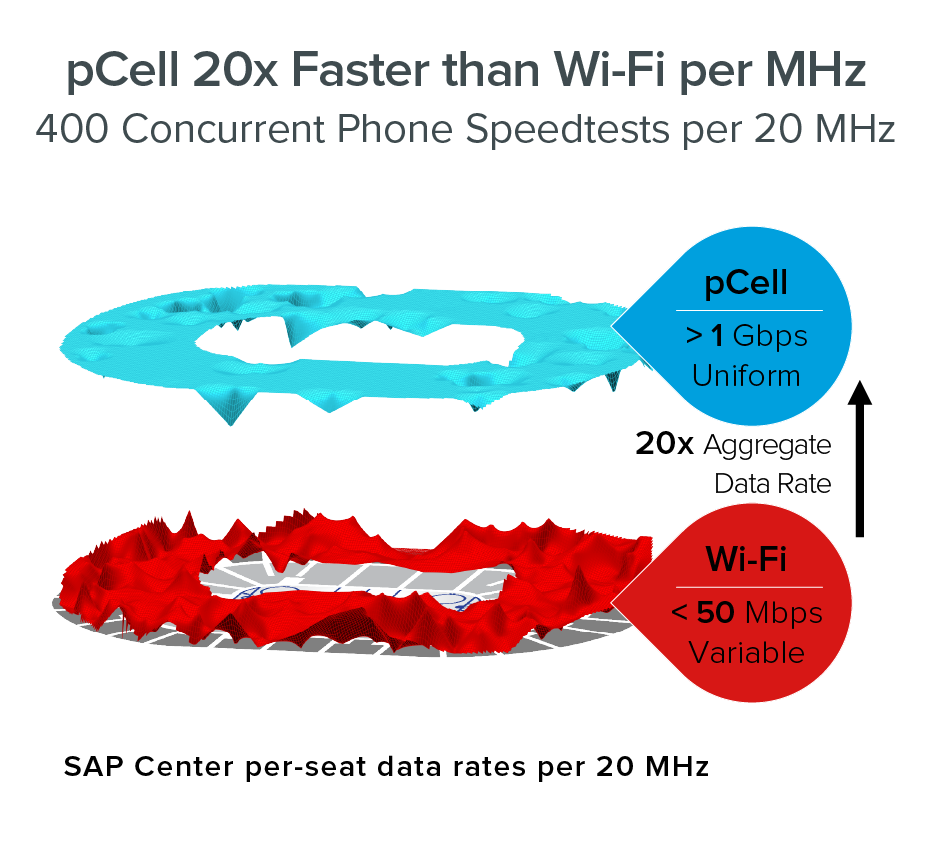 Underneath the chart is a seat map for the arena bowl. The height of the graph shows the speed test data rate at each seat location per 20 MHz, with Wi-FI LAN results in red and the pCell vRAN results in blue, normalized to the same bandwidth.

The pCell vRAN delivered uniform data rates to all 400 phone locations, while the Wi-Fi LAN delivered extremely variable data rates, with even worse variability than the Cellular RAN.

Wi-Fi LAN could not support all 400 users concurrently, resulting in 23% of the phones being unable to access the Internet at all, despite being attached to the Wi-Fi LAN. In successive tests, largely the same phones were left with no Internet access. For phones that prioritize Wi-Fi over mobile (e.g., to avoid data charges), this blocks Internet access through either Wi-Fi or mobile. 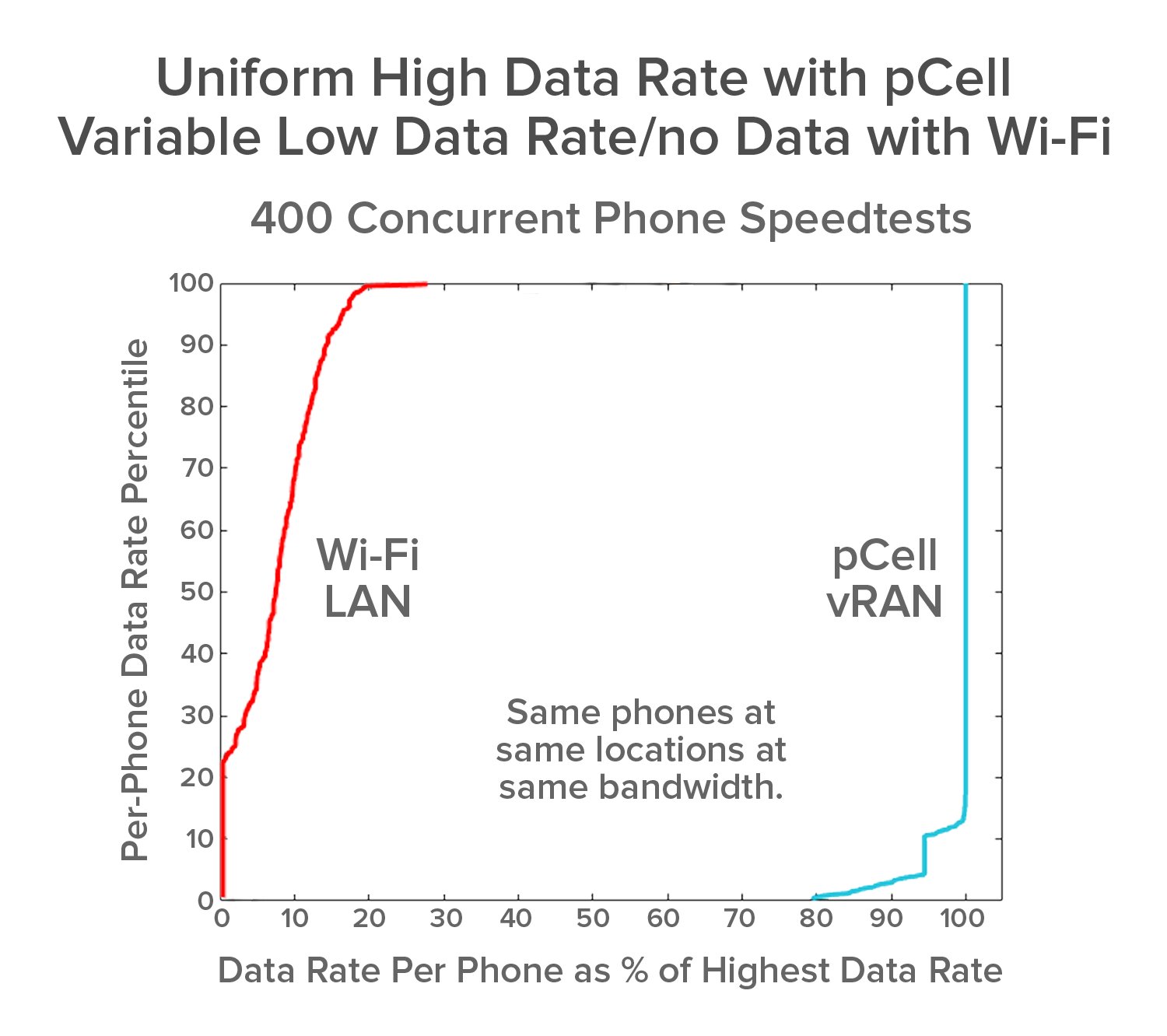 The previous Wi-Fi vs. pCell SAP Center per-seat data rate chart can be visualized as a Cumulative Distribution Function (CDF), which shows the percentile of 400 phones (vertical axis) receiving a given data rate relative to the percentage of the highest data rate phone in the same bandwidth.

With the pCell vRAN, almost 90% of phones receive the highest data rate resulting in a mostly vertical blue line. 97% receive >95% of highest, and the remaining 3% receive >80% of highest.

Spectral Efficiency (SE) is the data rate per Hz of spectrum bandwidth, or bps/Hz. Cellular RANs primarily increase SE by adding additional antennas to Cellular base stations and using MIMO techniques. The GSMA, the organization that represents mobile operators worldwide, recently published the average SE of LTE and 5G base station per Cellular MIMO Layer (i.e., the number of base station antennas), which is shown in the graph on the left. As the Cellular MIMO Layers increase from 2 (2x2) to 16 (16x16), the SE grows from about 2 bps/Hz to 5 bps/Hz, but with asymptotically leveling growth.

8. Frontend and Backend: Cellular vs. pCell 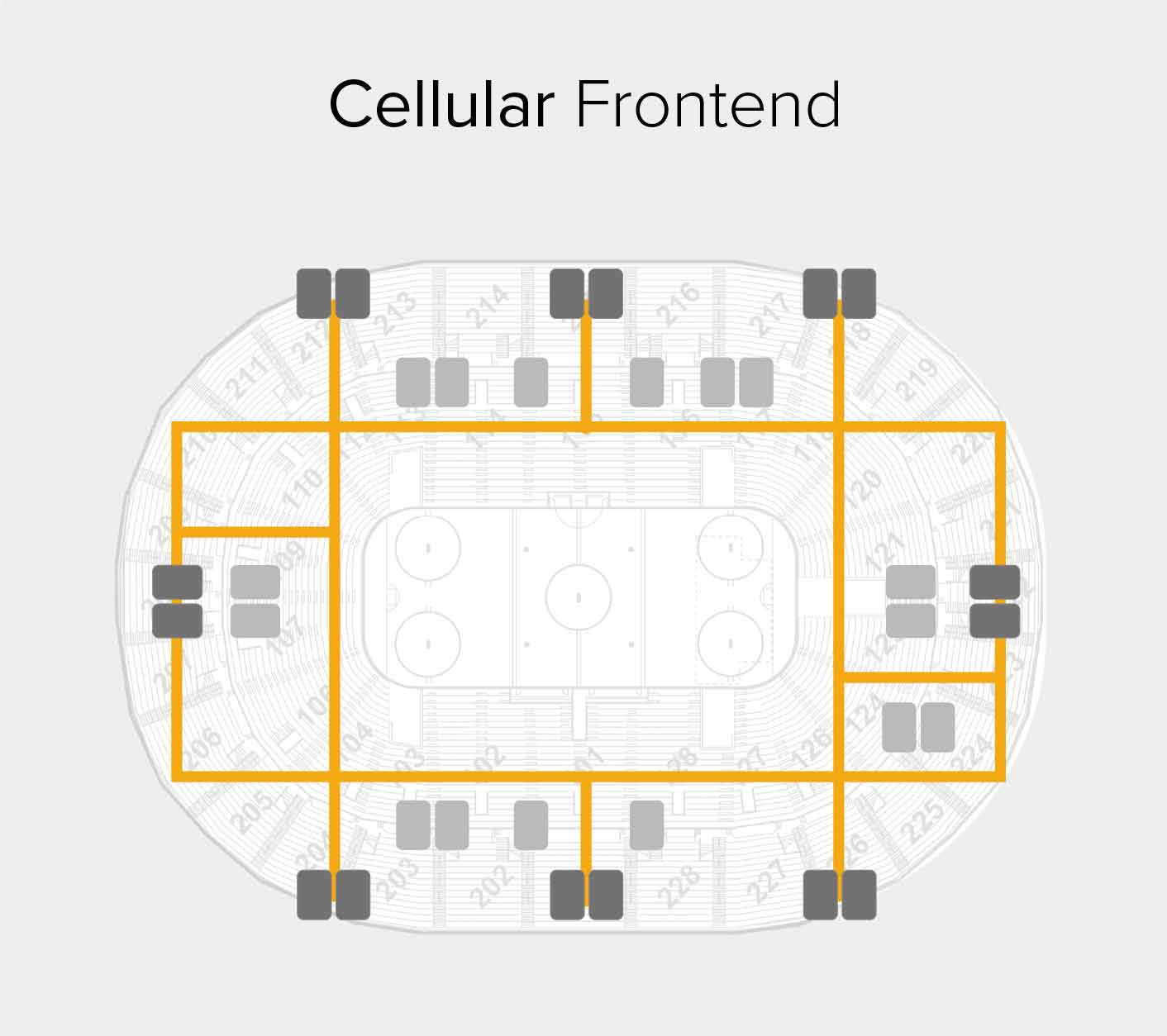 The SAP Center DAS Cellular Frontend has 32 Remote Radio Units (RRUs), 16 on the ceiling catwalk (dark gray) and 16 placed among the seats. Each has proprietary fiber routed to it from the DAS Cellular Backend, and each needs a separate power connection. The exact placement, aiming, and power balancing of these RRUs is critical to create Cells that avoid interference.

Note that the Cellular RRUs are far smaller than shown in the illustration. 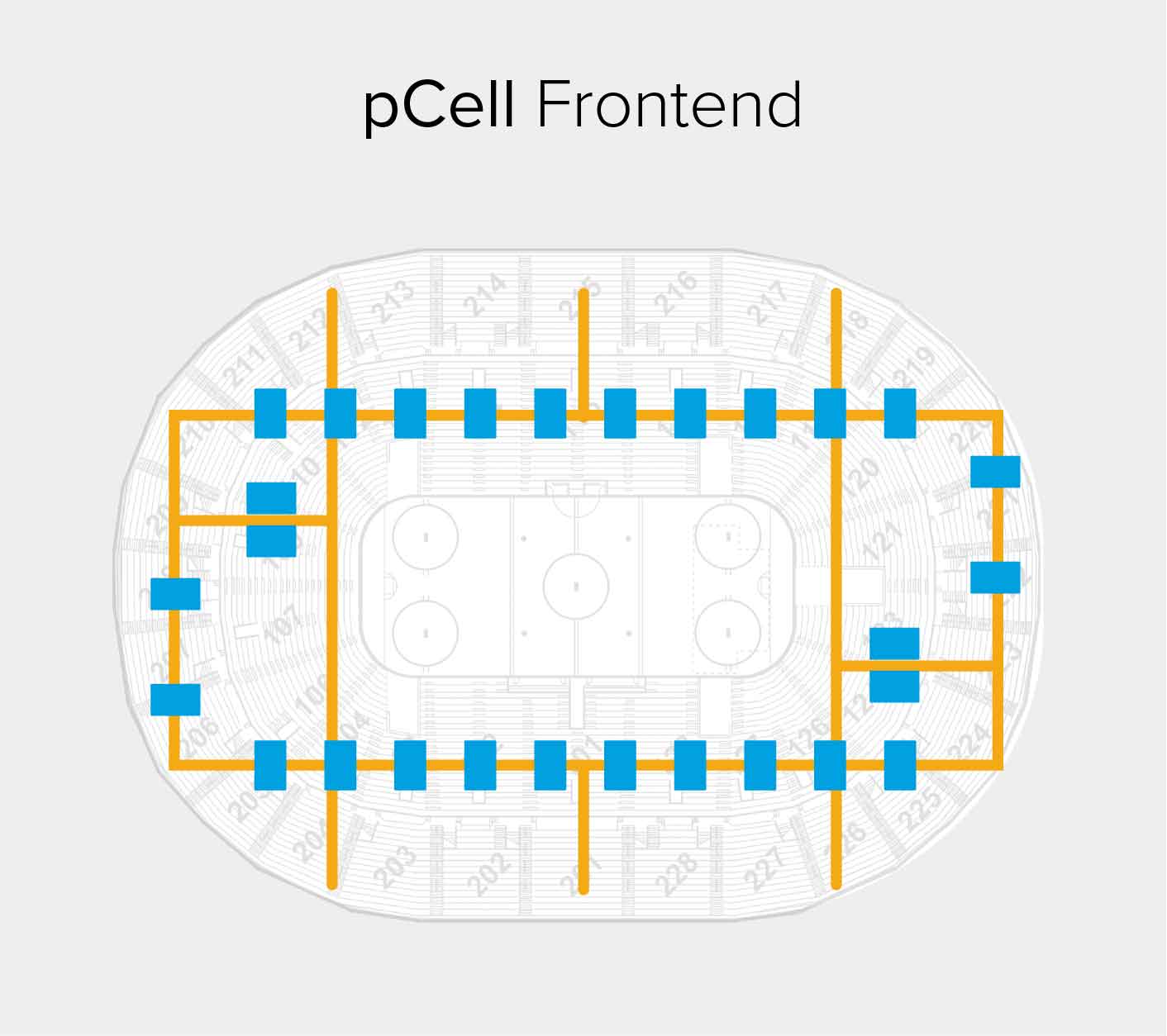 The SAP Center pCell Frontend has 28 2-antenna pWave RRUs mounted on the ceiling catwalk. The exact pWave placement, aiming or power balancing is not critical at all, as long as the pWaves are roughly distributed throughout the coverage area, and roughly aimed to create interference among them. The pWaves are connected to conventional Power-over-Ethernet switches, which deliver both power and data to them.

The placement of the pWaves was chosen largely because there were existing Cat5e cables at each location. Although the pWaves were ultimately installed in the catwalk for convenience, a pWave deployment among the seats was also tested, where they worked equally well.

Note that the pWave RRUs are far smaller than shown in the illustration, and also much smaller than the cellular RRUs. 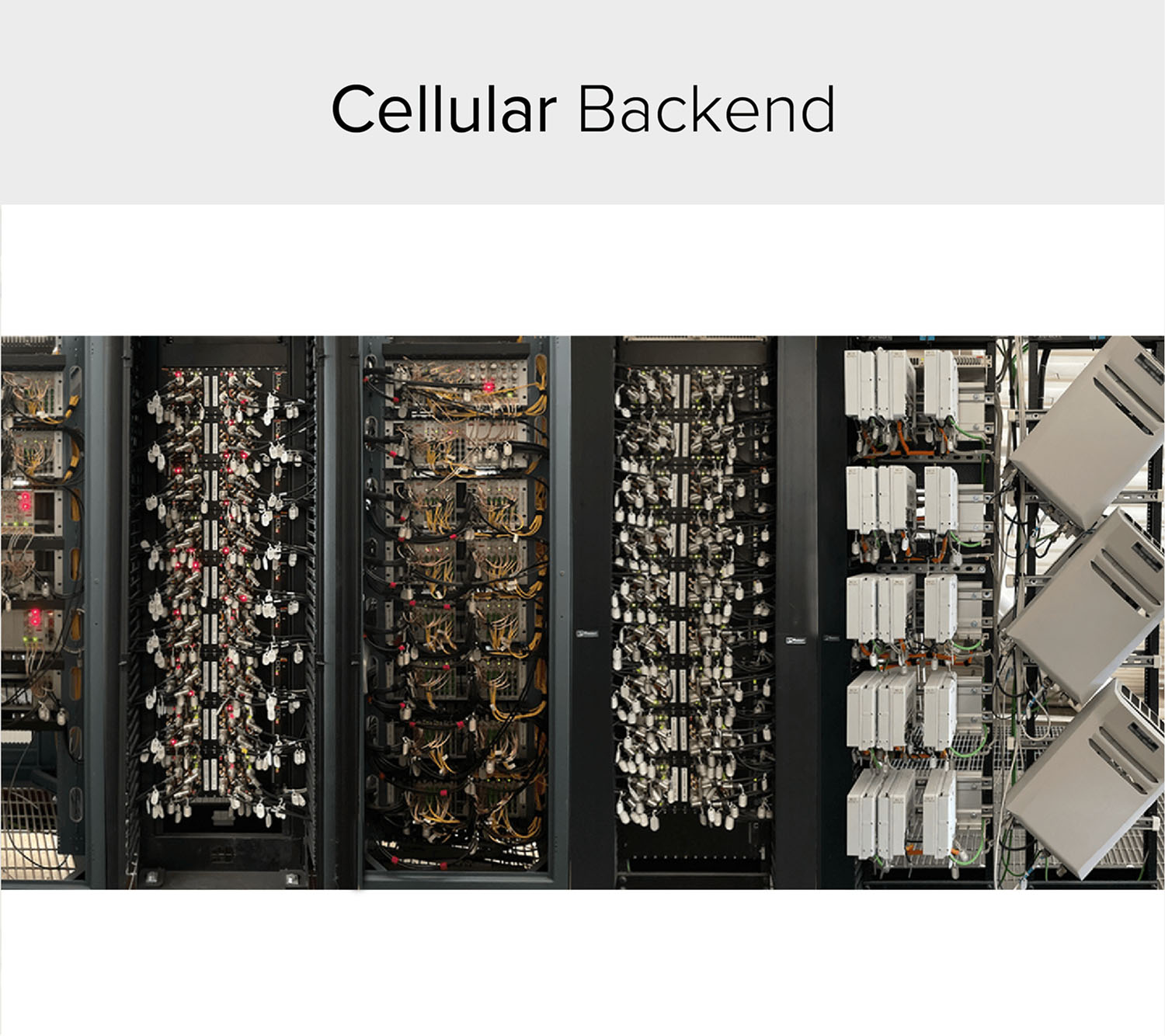 The SAP Center DAS Cellular Backend occupies an entire room filled with racks of digital and analog/RF equipment. There are over 1,000 cables of various types installed. It's a very large, complex system. 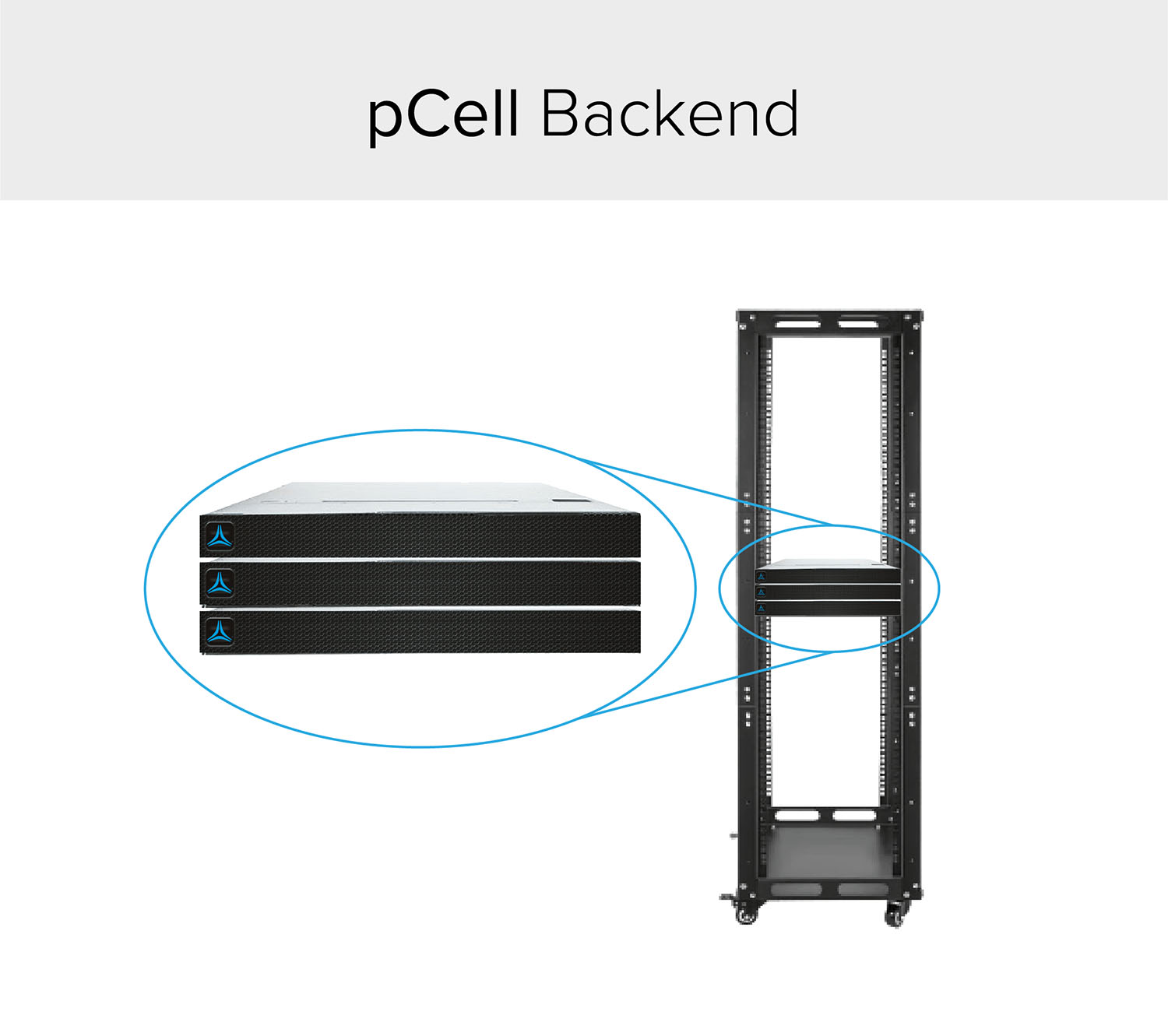 The pCell Backend consists of 3 COTS (commercial off-the-shelf) AMD- or Intel-based servers with no accelerator cards. They were installed in a room at SAP Center that had available rack space and existing fiber that ran to Intermediate Distribution Frames (IDFs) on the catwalk. 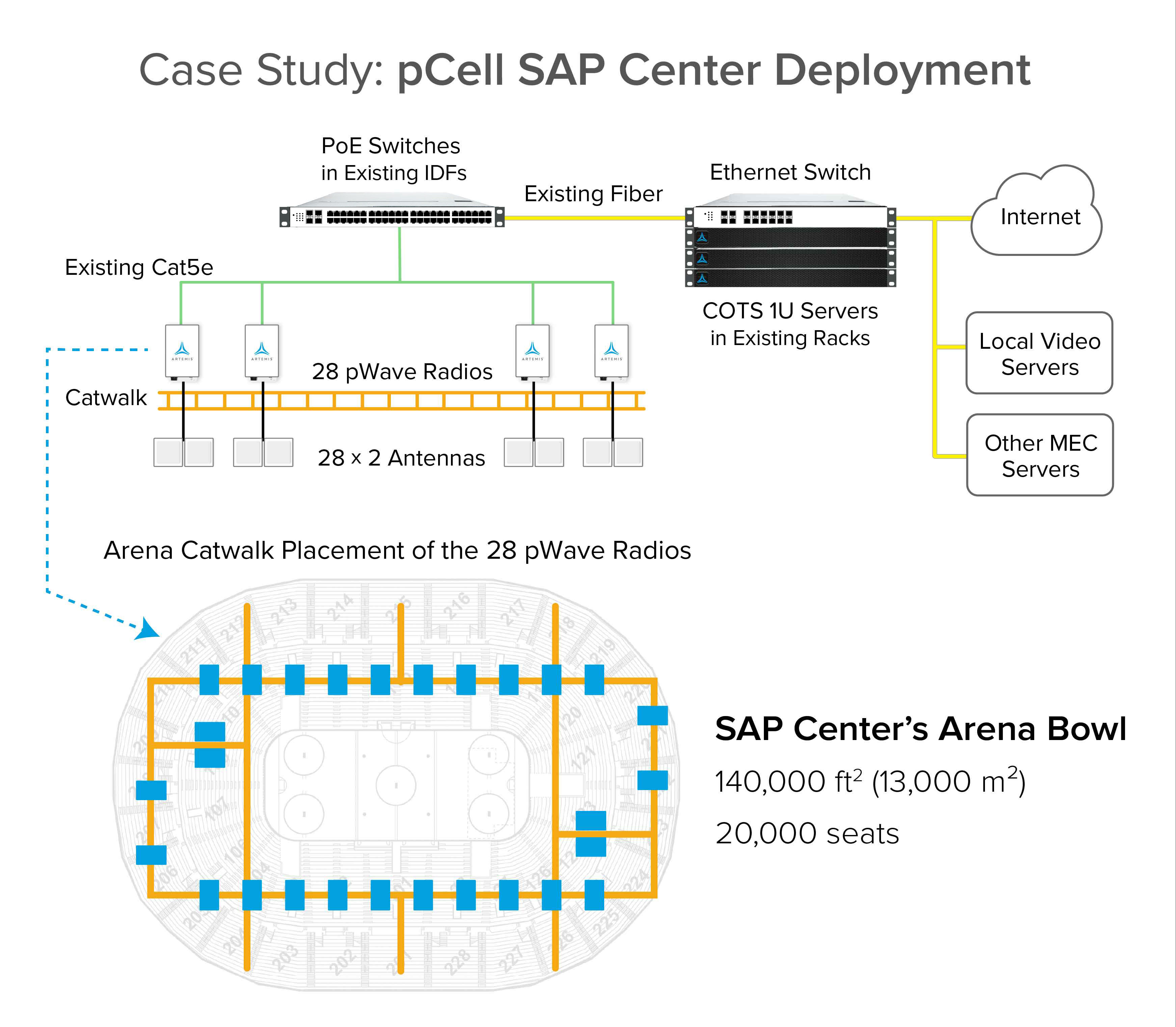 The SAP Center Arena Bowl pCell system consists of 28 2-antenna pWave radios deployed in the ceiling catwalk that are attached through existing Cat5e cabling to Power-over-Ethernet (PoE) switches in existing IDFs on the catwalk. The PoE switches are attached through existing fiber to an Ethernet switch, which is in turn attached to 3 COTS (commercial off-the-shelf) AMD- or Intel-based 1U pCell Servers running ultra-real-time Artemis pCell software. The Ethernet switch and pCell Servers are installed in SAP Center's sound room in existing rack space. 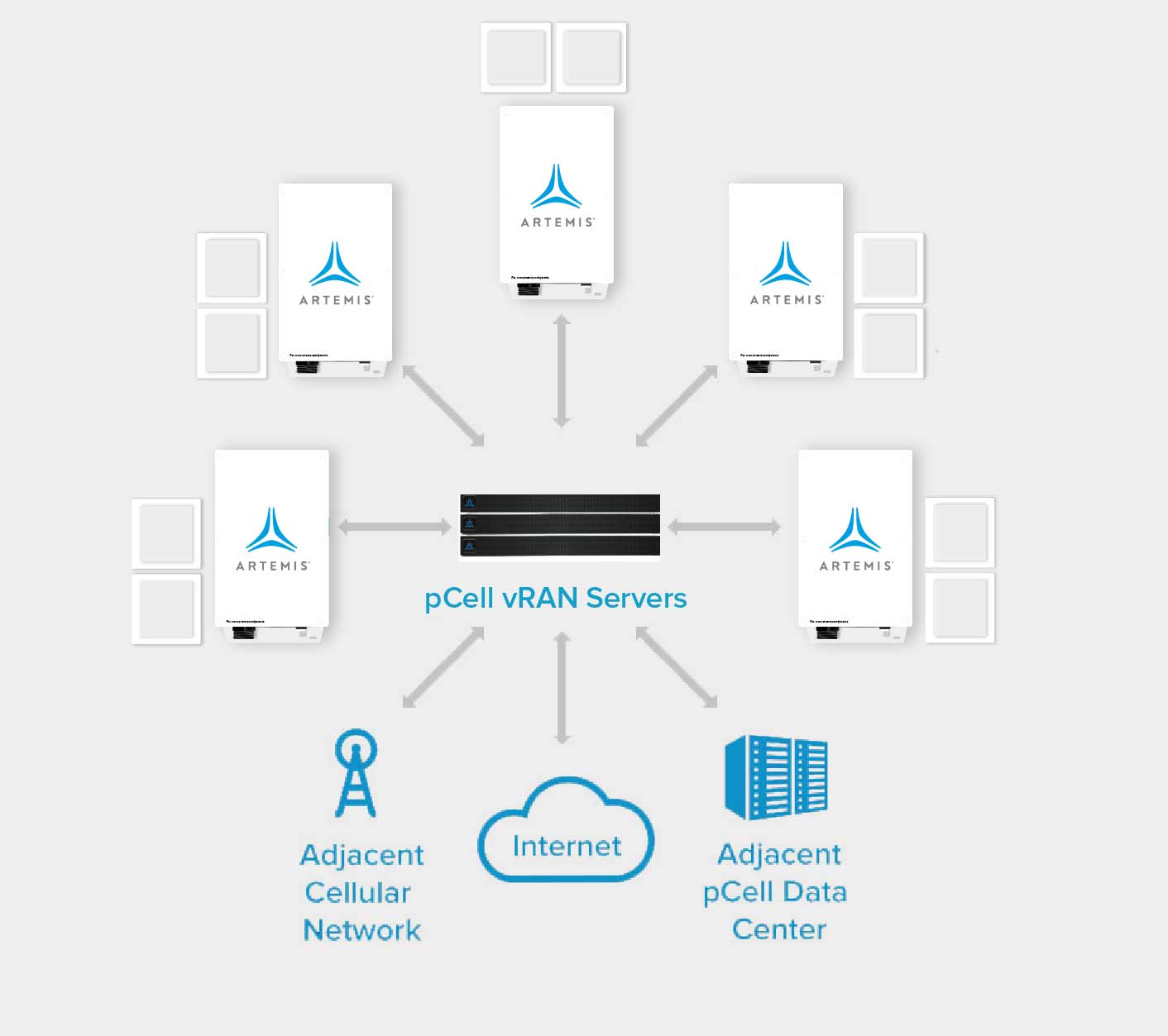 A pCell vRAN can operate as a standalone Private or Public LTE/5G pCell network with only its own pWave radios, or it can support hand-overs with an adjacent Cellular network at the edge of its coverage area.

A pCell System can also support seamless “transport” of mobile devices to another adjacent pCell vRAN via cooperating pWaves at the edges of the adjacent coverage areas. The mobile device is unaware of the transport, as its pCell continues to provide uninterrupted and unimpaired connectivity. 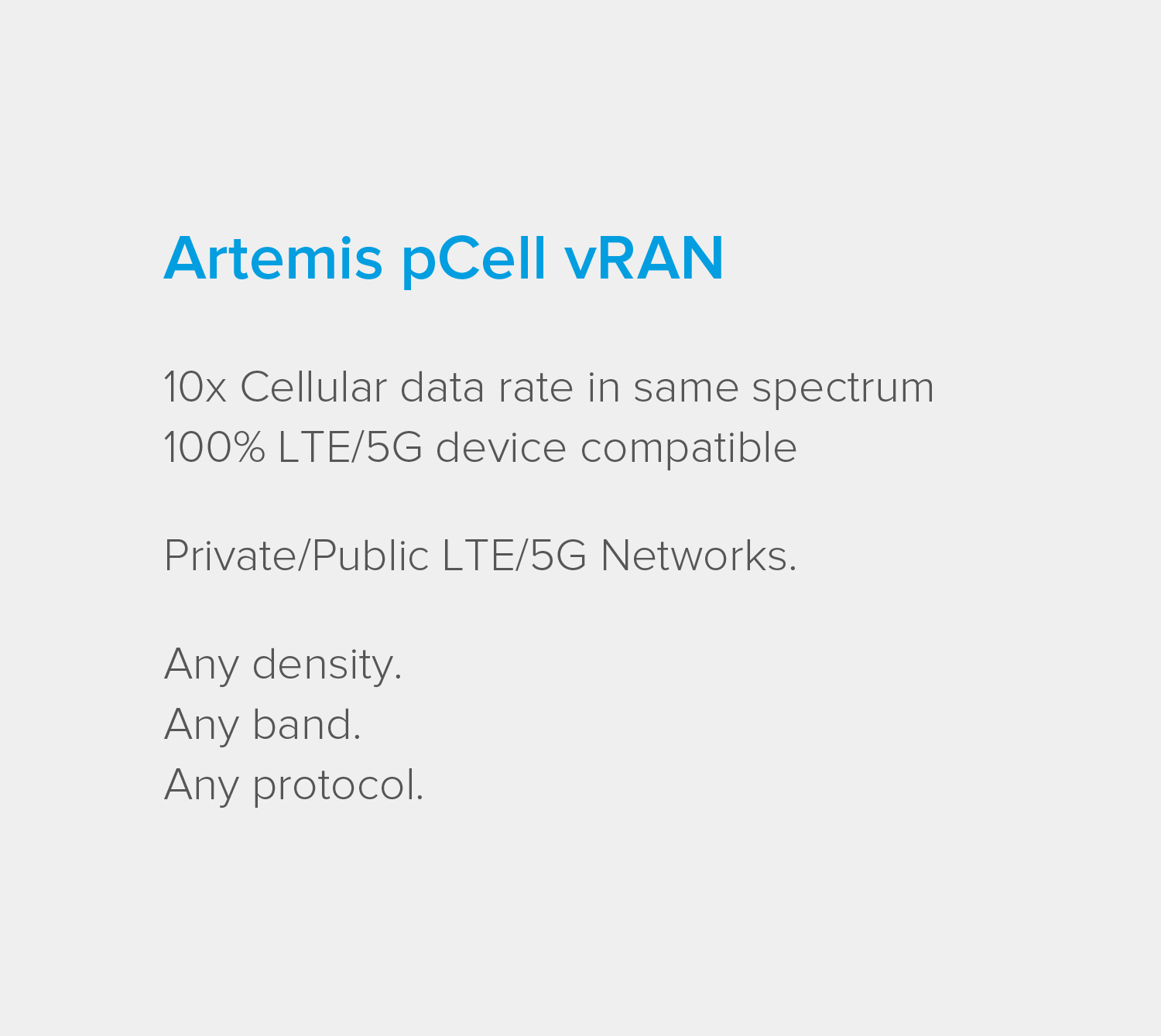 What are your private or public LTE/5G network requirements? Let us help. >